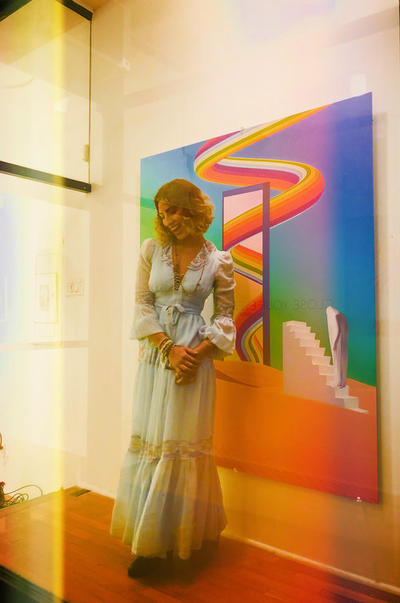 Brooklyn-based Swiss Artist Nat Girsberger creates collages and installations interpreting the unseen, a realm that includes the personal inner world, music and a collective psyche. Nat visually explores profound themes beyond the edge of perception and words and hints that everyone’s reality may just look a little different. She reimagines the world by rearranging it visually, creating colorful, retro-futuristic pieces that encourage viewers to connect to their unseen potential, and go beyond what they thought was accessible to them.
Nat creates out of her studio in Bushwick, taking commissions for clients such as Universal Music Group and NYU. New York City exhibitions include the 2018 solo show ‘Close Your Eyes’ at the Storefront Project Gallery, which was later shown at ‘68 Jay,’ and her 2017 solo show ‘Transient Terrain’ at Ivy Brown Gallery. She currently has a 3-story art installation and show on view at Showfields in Manhattan. She’s also exhibited in several group shows, such as Carrie Able Gallery, Wallplay, The Living Gallery and many more. Her work has been reviewed in various media across the globe, including Pitchfork, Whitehot Magazine and Hyperallergic among various others.
Nat graduated Magna Cum Laude from New York University Gallatin visual communication.