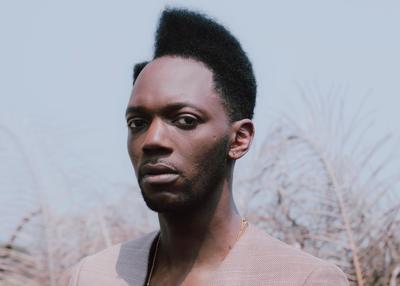 Baloji is a visual artist in motion, a film and art director, a musician, poet, a man of images and ideas. He’s in motion like the inhabitants of Avenue Kaniama in Lubumbashi. In motion like the synthetic afro beats he produces, the fruit of an unlikely alliance between rockrumba and futurist funk. In perpetual motion, like his limbs on stage as he fronts the Kaniama Show band, leading them in a sensual voodoo trance. In motion like the era captured by his pen, an era where the intimate and the political come together and clash.

Baloji was born in Lubumbashi (DRC Congo) and grew up in Belgium. His name means “man of science” in Swahili, but during the colonial period, that meaning shifted as a result of Christian evangelisation, to signify “man of the occult sciences” and then “sorcerer”. As a teenager, he started his first rap collective, Starflam. In 2008, as Baloji, he released “Hotel Impala” an autobiographical album about his life, conceived as a reply to a letter he received from his mother after a 25-year absence. The album was certified gold, with the album winning two “Octaves de la musique” awards as well as Rapsat-Lelièvre Award and Brassens Awards for Lyricists. He followed it up with albums Kinshasa Succursale in 2011 and 64 Bits and Malachite in 2015.