Pluralism and Democratic Governance in Ghana 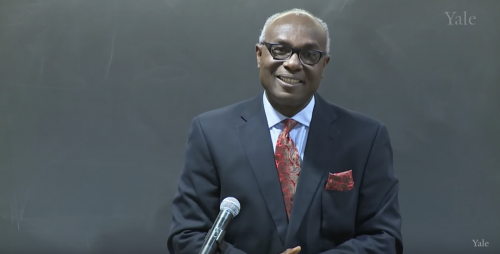 On November 16th 2017, Prof. Kwabena Asamoah-Gyadu - Baëta-Grau professor of Contemporary African Christianity and Pentecostal Theology at the Trinity Theological Seminary in Accra, Ghana, - gave a talk titled “Jerusalem: My Happy Home” to explore pluralism, democratic governance and Christian pilgrimage as religious equalization in contemporary Africa. His talk was sponsored by the Project on Religious Freedom and Society in Africa at the MacMillan Center, which aims to promote critical religious inquiry into the connection between freedom of religion and societal well being.

By taking recent debates in Ghana as a focal point, Prof. Asamoah-Gyadu presented an investigation into the relationship between religious faith and democracy in Africa. In doing so, he examined how religious actors contest for or seek recognition and support within modern democracies. Specifically, Prof. Asamoah Gyadu focused on the development of religious pilgrimage as a site of contest by Christian and Islamic communities for state/public support in Africa.

In 2013, headlines of government sponsorship of Christian pilgrims to Jerusalem splashed across Ghanaian newspapers. This occurred when the government sponsored 200 Christian pastors to travel to Israel – similar to its past sponsorship of the Muslim pilgrimage to Mecca. According to an official statement, the government’s goal was to “reverse some of the economic difficulties that the country is experiencing” and to respond to the calls of various Christian organizations for religious equalization. Prof. Asamoah-Gyadu argued this attempt at “religious equalization” points to the demands of a multiparty democracy and its need to collect votes from a variety of interest groups. In other words, the government was responding to these calls as an opportunity to accrue religious votes from both Christians and Muslims.

Nonetheless, the government’s push to sponsor pilgrimage to Jerusalem was met with a mixed response – both from ordinary citizens as well as various Christian organizations. Some argued that this measure reveals the presence of misplaced priorities, mismanagement of limited state resources and the unnecessary mixing of religion and politics. On the other hand, others argued that since the government sponsors trips to Mecca, it is only fair that it coordinates pilgrimage to Jerusalem as well. Similarly, various Christian organizations also endorsed state sponsorship because they believe it represents an exercise of religious equalization.

In discussing this contest for state recognition and support, Prof. Asamoah-Gyadu pointed out the importance of contextualizing the conversation in the historical relationship of Christians and Muslims in Ghana. While Islam only accounts for 15% of the population, the parliament of the majority Christian country previously created a development program specifically aimed to better prepare young Muslim children to compete with their Christian counterparts. Prof. Asamoah-Gyadu raised this point to illustrate that efforts for religious equalization and fair recognition in Ghana are not new.

Overall, Prof. Asamoah-Gyadu referenced this case in Ghana to examine relationship between religious faith and democracy in Africa by questioning the historical and theological significance of interpreting Jerusalem as a place of pilgrimage (in a similar fashion to Mecca). He argued that rather than a theologically justified development in Christian practice this example represents the pursuit by religious adherents for recognition and equality in a pluralistic society. The request for a state sponsored trip to Jerusalem is a response by certain Christian communities to equalize the benefits that they think Muslim communities are receiving. Consequently, state sponsored pilgrimage “reveals much about the relationship between Christianity and Islam on the one hand and their relationship with the new political order on the other.”  In addition, it provides a means in which “to appreciate the growing public discourse on faith and freedom issues in contemporary African societies.”

You can see a video of the lecture here.