Four-hundred years after enslaved Africans arrived on the shores of colonial Virginia, scholars of the Association for the Study of the Worldwide African Diaspora (ASWAD) ventured to colonial Williamsburg for its 10th Biennial conference. ASWAD participants subverted the historically violent landscape in symbolic acts of scholarship, collaboration, and fellowship that paid homage to the fighting histories of African and Afro-diasporic peoples. The still forests, eerie bridges, and cobblestone walkways that distinguish colonial Williamsburg were transformed with the celebration of Black history, music, dance, art, fashion, and hairstyles floating through the grand halls of William and Mary.

With the support of the Yale Council on African Studies, I attended this important convention to share my research on the transnational movement against South African apartheid. Our panel, “Part of the Whole: South African Exiles Confront the West” examined the vexed position of South African exiles whether as political leaders, teachers, students, musicians, and artists between 1960 and 1994.  My presentation, “Black Consciousness Transforms Higher Education in the United States,” interrogated the centrality of South African students to the well-known student divestment protests at Columbia University during 1985 and 1986. By highlighting the driving roles of Black American and South African students in the Coalition for a Free South Africa’s hunger strike and occupation of Columbia University’s administrative building, Hamilton Hall, I situated Black student protesters in the vanguard of the U.S. divestment movement.

As Black students from South Africa radicalized U.S. students and grew the support-base for the blockade, the aperture on apartheid widened. But their successes augmented their vulnerability as foreign students. When the apartheid government learned of the students’ centrality to the Columbia divestment movement (whether through university-CIA channels or international news), the South African Security Police assaulted and detained the families of the students. Unsure if they would be tried under the notorious Treason Act that had once imprisoned Nelson Mandela and many other political dissidents, the students were afraid to risk returning home. Anti-apartheid activism at Columbia made the South African students the enemies of the apartheid state. With homegoing a distant choice, the students considered applying for amnesty to remain in the United States after commencement. 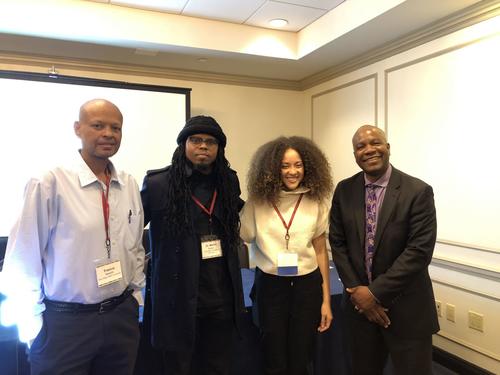 Discussants Robert Vinson and Francis Nesbitt led a conversation on the embodied experience of exiled South Africans, the Nationalist Party’s international spy apparatus, and interpretations of South African exiles as a cohesive power-block, despite liberation party divisions.  In conversation with Dr. Martin L. Boston’s presentation on the exilic consciousness of Miriam Makeba, our group engagingly discussed the international movement against apartheid in higher education, music and film, and on Capitol Hill. My favorite comment came from a former anti-apartheid student activist from Morris Brown College who remembered protesting apartheid in Atlanta’s housing projects and marching with Atlanta-based South African exiles. He said, “I was inspired based on what I heard.”

The conference concluded with Dr. Ben Talton’s interview with renown writer and journalist, Ta-Nehisi Coates. Coates joined ranks with anthropologists, sociologists, literary scholars, ethno-musicologists, and historians to give a keynote interview to one of the largest public audiences that I have ever seen. In discussing his most recent text, The Water Dancer, Coates elaborated on the significance of visiting Monticello and studying the plantation’s built environment. For him, this served as one of a few methodological tools that helped him recover the daily nuances of enslaved people’s survival and resistance in one of the most brutal and dehumanizing systems of the modern era. In nourishing these cross-cultural, multi-disciplinary, publicly-oriented encounters ASWAD 2019 offered a vision of what scholarship on Africa and the African diaspora should look like in its next decade.