The increasing scale and scope of climate change has brought attention to the ways communities across the planet experience, conceptualize, and negotiate a variety of ecological challenges. African scholars have offered critical perspectives on the dynamic ways African communities are addressing a variety of environmental issues and imagining radical visions for the future of the planet. Cajetan Iheka, Associate Professor of English here at Yale, is one of the scholars at the forefront of these conversations.

Professor Iheka’s research and teaching focus on African and Caribbean literatures, ecocriticism, ecomedia, and world literature. He is the author of Naturalizing Africa: Ecological Violence, Agency, and Postcolonial Resistance in African Literature (Cambridge UP 2018), winner of the 2019 Ecocriticism Book Award of the Association for the Study of Literature and Environment. Most recently, he completed his second monograph, African Ecomedia: Network Forms, Planetary Politics (Duke UP 2021). Examining film, photography, and other visual arts, African Ecomedia positions Africa at the center of discourses on media ecologies, materiality, and infrastructure in media studies. Professor Iheka is editor of the  Modern Language Association (MLA) Options for Teaching volume, Teaching Postcolonial Environmental Literature and Media (MLA 2021), and co-editor of African Migration Narratives: Politics, Race, and Space (Rochester UP 2018). With Stephanie Newell, he co-edited a special issue of African Literature Today (ALT 38) on Environmental Transformations.

Professor Iheka’s articles have appeared in refereed venues such as Interdisciplinary Studies in Literature and Environment, Journal of Visual Culture, Environmental Ethics, Research in African Literatures, and the Oxford Handbook of 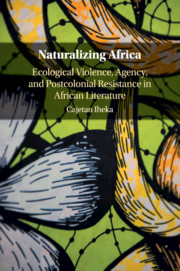 History Ph.D. Candidate and CAS affiliate, Marius Kothor, sat down with Professor Iheka to discuss the major themes of his work. What follows is an edited version of their wide-ranging conversation about the representations of African ecologies in Afro-futuristic discourses, how scholars might conceptualize an Afro-Diasporic ecology, and how we can collectively use this  moment of ecological crisis to work towards a vision of ecological prosperity that transcends artificial and natural boundaries.

MK: Can you tell us a little about how you came to studying African ecologies through the discipline of English?

CI: Marius, thank you for this opportunity. I developed this research interest as an undergraduate in Nigeria, specifically in a class centered on narratives and poetry from the Niger Delta. These texts resonated because the region was in the news for the militancy against exploitation by oil companies and the government. It was fascinating to see the curriculum and the world intersect in this way. When the university curriculum is heavily Euro-American as it was for my undergraduate training, the injection of African materials provides a breath of fresh air. But reading works on the Niger Delta at a nearby state university, amid the unfolding of a global energy crisis, hooked me. The more I studied though, the more the crisis and the literary texts took on ecological significance for me. Reading the early work in the environmental humanities and ecocriticism helped to sharpen that interest because of the limited material on Africa. With the interesting literary and cultural materials that I encountered, I saw an opportunity to foreground the continent and to shape the emerging discourse in postcolonial ecocriticism from the continent’s perspective. An ecological framework provides a rewarding experience for me to demonstrate the worldliness of literature and other cultural objects from an African perspective.

MK: The introduction to your forthcoming book includes a fascinating discussion of the film Black Panther and its portrayal of Africa as site of infinite environmental resources. What does Black Panther get wrong about African ecological futures and what alternative visions for the planet would you like to see reflected in Afro-futurist discourses?

CI: Black Panther perpetuates the same energy unconscious pervading futuristic renditions on Africa. The film’s future is the reality in Africa right now if you consider the fact that vibranium—a fictional energy resource—fuels Wakanda’s economy—and undergirds the film’s conflict. The struggle to control vibranium underpins Ulysees Klaue’s visit to Wakanda and the environmental devastation following the explosion he sets off as he escapes. The cousins (T’Challa and Killmonger) fight over the throne but the control of vibranium motivates them as it did their fathers. I wanted to problematize the film’s conjoining of Africa, resources, and crisis—socio-political and environmental—that is the norm today. We cannot carry that into the future. In the book, I argue for an Afrofuturism that does not repeat the problems of the present. That means taking seriously the fact of energy regimes and their ecological conditionalities. It would also mean taking seriously the finitude of the planet in future prognostications.

MK: Afrofuturism is optimistic by nature. Given the global reach of White Supremacy, projecting Black lives into the future is a radical, defiant act. In your new book, however, you use the ecology of the Niger-Delta region of Nigeria to consider how the future might also be traumatic. How do we attend to this “yet-to-come” trauma of the future without becoming pessimistic?

CI: I think my response here is connected to the previous one. I consider myself a radical optimist and try to reflect that in my scholarship. But it is also important not to lose track of the traumatic conditions in Africa over centuries as we envision radical possibilities for Blackness in the face of flagellation. I use the trauma of the future to attend to the lingering consequences of past and present traumatic events on the continent and the need to take them seriously as we consider alternative scenarios. A quick example would be again to look at the infrastructure of oil production in Nigeria in the context of a post-carbon world. The cessation of oil activities in Nigeria would not automatically stop the degradation of human and nonhuman ecologies in the region. As Rob Nixon has made clear, we must attend to the violence of environmental harm, which can be slow in the making and unfold across time and space. In positing this notion of trauma still to come, I want to ensure that our futuristic projections can guard against the repetition of the violence confronting Black lives today.

MK: Although your work focuses on various regions of Africa, Nigeria’s Niger-Delta region features prominently in your books and articles. What keeps you returning to this region?

CI: Marius, you know what they say about first loves? It is hard to let go! The Delta was my introduction to the world of the environmental humanities and it is where I know the most. A more compelling reason is that the energy infrastructure of the Delta, of oil, is at the heart of the global economy, and is largely responsible for the immiseration in the region and the climate crisis. It helps too that a robust body of cultural production—literature, film, music, art installation, and other media arts have been devoted to the area. It is difficult to walk away given these factors.

MK: In both your scholarship and teaching, you examine the works of African, African-American, and Afro-Caribbean writers. Has your engagement with these literary traditions given you a sense of how we might conceptualize an Afro-diasporic ecology? That is to say, are there unique ecological challenges or modes of engagement with the environment that you see across Africa and its diaspora?

CI: This is a complex question requiring an extended answer, but I will try to respond succinctly and then urge unsatisfied readers to pick up my forthcoming book on African Ecomedia from Duke University Press. I must say that it has been useful to think with the works of African American and Caribbean thinkers including Sylvia Wynter, Fred Moten, and Alexander Weheliye in my research. I see so much conjunctions—literal and metaphorical between African and diasporic communities in the shared vulnerabilities of Black lives. There are differences but it is a similar logic—of the dispensability of Black lives—that is responsible for the targeting of Black people in America and the threat to African lives under regimes of toxic waste dumping and testing of unsafe pharmaceuticals on people as Pfizer did in Nigeria. When Eric Garner says he can’t breathe in New York, his suffering can be connected to the suffocation of communities across the continent due to mineral extraction, which has poisoned the air and jeopardized foodways. I can go on about these negativities but there is a shared positive dimension too, the way that African and diasporic communities are turning to decolonial epistemologies and practices to care for their environment and to imbibe an ethic of interconnection across species.

MK: The Covid-19 pandemic, the floods in West Africa, and the wildfires in Australia and the American West have all brought renewed attention to the global implications of climate change. What ecological lessons do you hope we collectively take away from this moment?

CI: I think the biggest lesson is our interconnection despite the artificial borders created over time to separate us into humans and animals, developed and developing nations, first and third world, black and white, etc. African communities may be overexposed to these calamities, but the pandemic is a reminder that we are in this together regardless of location and social indices. The challenge then is to see this proximity as less of a problem and more of a possibility; a possibility for being-with and working toward just, decolonial futures.

Marius Kothor is a Ph.D. Candidate in the Department of History with broad research interests in 20th century African history, gender, and Black Internationalism. Her dissertation focuses on women trader’s political and economic contributions to Togo’s independence movement and how Togo’s anti-colonial struggle informed African American discourses on decolonization in Africa.