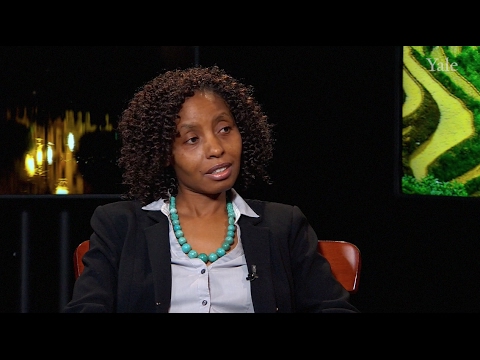 Veronica Waweru, a lecturer in Yale’s MacMillan Center, gave a talk at Luce Hall on Thursday on the lack of understanding among locals in Kenya about research taking place in their own communities.

With the current emphasis on the “Out of Africa” theory, which posits that human life originated in Africa, researchers flock to Africa to find clues of early civilization, but often neglect to relay their work to the local populations surrounding these archeological sites. Now, through education and an emphasis on empowering local researchers, Waweru hopes the status quo will soon change.

She opened her talk with anecdotes from her years spent performing anthropological research in communities in Kenya.

“I left that place pleasantly surprised and a little ashamed that I had assumed these people would not really understand evolution,” Waweru said, adding that local populations often have an intuitive understanding of evolutionary concepts.

Researchers from abroad often have limited interaction with the locals living in the vicinity of their research sites, Waweru said. Some researchers simply don’t want to distract themselves from their work, while many others assume that locals do not comprehend the concepts they are studying. According to Norah Langat, program coordinator for the Council of African Studies, that misplaced belief indicate a set of biases that often go undiscussed in the scientific community.

Waweru described travelling around Kenya and conducting archaeological searches: Many young people from the communities in which she worked were fascinated by the searches and excavations her team conducted and were eager to learn more.

While many of the locals lacked a formal education in evolution, they intuitively comprehended how it had molded the world around them, she continued. When the researchers laid out some of the basic concepts, the community members were quick to connect them to their grasp of their own environment.

Some locals even gave specific examples, which she relayed to the audience. One person told her,

“We all know some animals are more related to others. Those in the cat family are sneaky and dangerous.”

On another occasion, she recalled, she explained to locals the theory that humans share a common ancestor with apes — and the locals responded that they do not eat monkeys because the animals so closely resemble humans.

Over the course of her trip, Waweru spoke with a number of community members, many of whom had allowed researchers to scour their land for artifacts.

“This is stuff that’s being taken out of your backyard, and it’s being used to write stories about your origins,” she said, adding that she grew to see things from the locals’ perspective — researchers arrived, carried out research, then immediately left.

Researchers in Kenya collect artifacts that are transferred out of the locality and often out of the country. These same researchers write books, articles and studies about their work, which are published in venues that are largely inaccessible to the people whose homeland they discuss.

Waweru said she hopes for progress on that front and that members of communities all over Africa will have access to the histories of their land. She spoke at length about a new museum in Narok, Kenya, where locals in the region can learn about early civilizations through visual presentations and interactive displays.

“We, the locals of these countries where these artifacts are from, are not direct consumers of this information, and I would definitely like that to change,” said Faith Chumo ’20, an attendee of the talk who grew up in Kenya. Chumo agreed with Waweru’s assessment that the movement of artifacts and information away from local populations and toward Western audiences is financially motivated.

The talk was organized by the Council on African Studies, which holds lecture series in the fall and spring. The council invites a wide variety of speakers from different fields in order serve as a hub for all people doing research on Africa at Yale, Langat said. She added that she was particularly impressed by Waweru’s approach to studying how research is conducted in Africa.

“She has a really unique angle of looking at how we can make sure local communities are engaged with the researchers who are coming in, often from the West, and how their voices can be woven into the research that comes out,” Langat said.