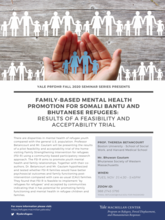 There are disparities in mental health of refugee youth compared with the general U.S. population. Professor Betancourt and Mr. Gautam will be presenting the results of a pilot feasibility and acceptability trial of the home-visiting Family Strengthening Intervention for refugees (FSI-R) using a community-based participatory research approach. The FSI-R aims to promote youth mental health and family relationships. Together with their co-authors, Dr. Betancourt and Mr. Gautam hypothesized and tested whether FSI-R families would have better psychosocial outcomes and family functioning post-intervention compared with care-as-usual (CAU) families. They found that FSI-R is feasible to implement “by refugees for refugees” and accepted by communities indicating that it has potential for promoting family functioning and mental health in refugee children and families.
Professor Betancourt’s central research interests include the developmental and psychosocial consequences of concentrated adversity on children, youth and families; resilience and protective processes in child and adolescent mental health and child development; refugee families; and applied cross-cultural mental health research. She is Principal Investigator of an intergenerational study of war in Sierra Leone (LSWAY), which led to the development of a group mental health intervention for war-affected youth that demonstrated effectiveness for improving emotion regulation, daily functioning and school functioning (Youth Readiness Intervention (YRI) and for scaling-up youth employment programs. Domestically, she is engaged in community-based participatory research on family-based prevention of emotional and behavioral problems in refugee children and adolescents resettled in the U.S. She has written extensively on mental health and resilience in children facing adversity in several prestigious academic journals.
Bhuwan Gautam, who comes with over one and a half-decade of lived refugee experience, is a Bhutanese community leader and a co-researcher on two NIH-funded projects to address the mental health and wellbeing of resettled Bhutanese in the US and Canada. Mr. Gautam was the recipient of the 2018 “40 Under 40” leadership award presented by BusinessWest Journal. His Op-Ed articles and commentaries have appeared in a number of local and regional media. Through the CBPR collaborations with Drs. Theresa Betancourt and Rochelle Frounfelker at Boston College, Harvard, and McGill University, Bhuwan has co-authored a number of research articles on Bhutanese mental health issues in the United States and Canada. He received his MPA from Westfield State University in 2017.