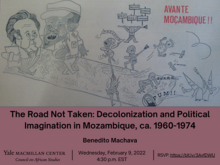 We are often told that democracy in Africa came through the demands of international financial institutions keen on shifting the continent from state-led developmentalism to neo-liberalism at the dawning of the Cold War. In Mozambique, the proof is the opening of the political sphere as part of World Bank-led structural adjustment programs, which led to the emergence of multiple parties in 1990. The Road Not Taken demonstrates that there was a moment in the 1970s in which the political sphere was wide open in Mozambique, one led not by external demands, but by genuine endogenous political thinking. With the prospect of decolonization suddenly on sight, both Africans and white settlers wrestled with ideas of democracy and the political futures that could best accommodate the racial, class and ethno-cultural differences of Mozambique’s society and deal with the legacy of colonialism. Short lived and experimental as it was, that moment remains the most democratic and politically dynamic in the history of Mozambique.